get rid of the penny First Friday Book Synopsis

As evidence of how nervous we are about global finance, James Rickards‘ book on the subject, released on November 15, has shot all the way to # 3 as a debut selection.  News about this appeared in the Wall Street Journal Business Best-Seller Hardcover list, published on November 26-27, p. C14.

Rickards’ title is The Road to Ruin:  The Global Elites’ Secret Plan for the Next Financial Crisis (New York:  Portfolio).  The book is currently # 1 in three Business and Money categories on Amazon.com

This is not Rickards’ first book.  As I both paraphrase and quote from his biography published on Amazon.com, he is the Editor of Strategic Intelligence, a financial newsletter, and Director of The James Rickards Project, an inquiry into the complex dynamics of geopolitics and global capital.  He is the author of The New Case for Gold (April 2016), and two New York Times’ best-sellers, The Death of Money (2014), and Currency Wars (2011) published by Penguin Random House. “He is a portfolio manager, lawyer, and economist, and has held senior positions at Citibank, Long-Term Capital Management, and Caxton Associates. In 1998, he was the principal negotiator of the rescue of LTCM sponsored by the Federal Reserve. His clients include institutional investors and government directorates. He is an Op-Ed contributor to the Financial Times, Evening Standard, New York Times, and Washington Post, and has been interviewed on BBC, CNN, NPR, C- SPAN, CNBC, Bloomberg, Fox, and The Wall Street Journal. Mr. Rickards is a guest lecturer in globalization and finance at The Johns Hopkins University, The Kellogg School at Northwestern, and the School of Advanced International Studies.”

The essence of this book appears in a description on Amazon.com:  “As Rickards shows in this frightening, meticulously researched book, governments around the world have no compunction about conspiring against their citizens. They will have stockpiled hard assets when stock exchanges are closed, ATMs shut down, money market funds frozen, asset managers instructed not to sell securities, negative interest rates imposed, and cash withdrawals denied.”

It remains to be seen whether we will present this book at an upcoming First Friday Book Synopsis.  Part of this depends upon the critical reviews the book receives, and how well it performs on upcoming best-seller lists.  But, there is little question that the book will continue to receive much attention over the next several months.

I feel I really accomplished something!  I finished the third volume in Ken Follett’s Century trilogy.

These were WONDERFUL books, tracing five families through three generations, beginning in Europe and ending in America.

These are fast-paced books, with terrific dialogue, action, drama, fear, character development, sex, and everything else you can think of.  You can buy the entire set at one price.

I wish everyone could read these!

I have never been on board with electronic books.  I am not excited about any of the devices such as Kindle, Nook, or iPads.  I like a book.  I like to hold it, carry it, display it, and engage in conversations about it when others see what I am reading.

I thought it was interesting in the Wall Street Journal on May 9, 2011, when Penguin Books CEO John Makinson claimed there is still a future for physical books.  The article is entitled “Penguin CEO Adjusts to E-Books but Sees Room for the Old” (p. B9).  The link to the full article appears below, authored by Jeffrey A. Trachtenberg.

Notice that he says that physical books will always be published.  “As we add value to the physical product, particularly the trade paperback and hardcover, the consumer will pay a little more for the better experience. I looked the other day into the sales of public-domain classics in 2009, when all those books were available for free. What I found was that our sales had risen by 30% that year. The reason is that we were starting to sell hardcover editions—more expensive editions—that people were prepared to pay for. There will always be a market for physical books, just as I think there will always be bookstores.”

And, even with the closing of Borders’ bookstores, he finds a strong future for such retail outlets.  “There is a future in book retailing. A lot of the issue is not just that there are too many bookstores, but that they are too big. How do you diversify the offerings to consumers in order to make productive use of space without losing the experience of being in a bookstore?”

Finally, as I have stressed in other posts on this blog, there is a strong emotional link that book owners experience that goes beyond mere content.  Makinson notes that “When you look at the structural competitive advantages Amazon.com has over any physical bookstore, it is overwhelming. But people will willingly pay a higher price in an independent bookshop knowing they can buy [the same book] for less down the road. That’s because consumers feel an emotional engagement with the bookstore and feel that bookstores are providing a public service as well as a commercial service. I see no evidence that independent bookstores will become obsolete.”

I am excited and energized by the fact that a leading, credible authority in the business remains in the physical book arena.   While he reads manuscripts in digital devices, he reads physical books as well. 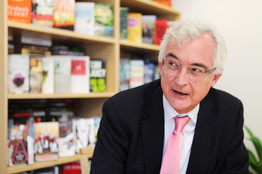 What do you think?   Let’s discuss this really soon!